Idea of ‘Salam from Saudi Arabia’ conceived by Turki Al-Sheikh 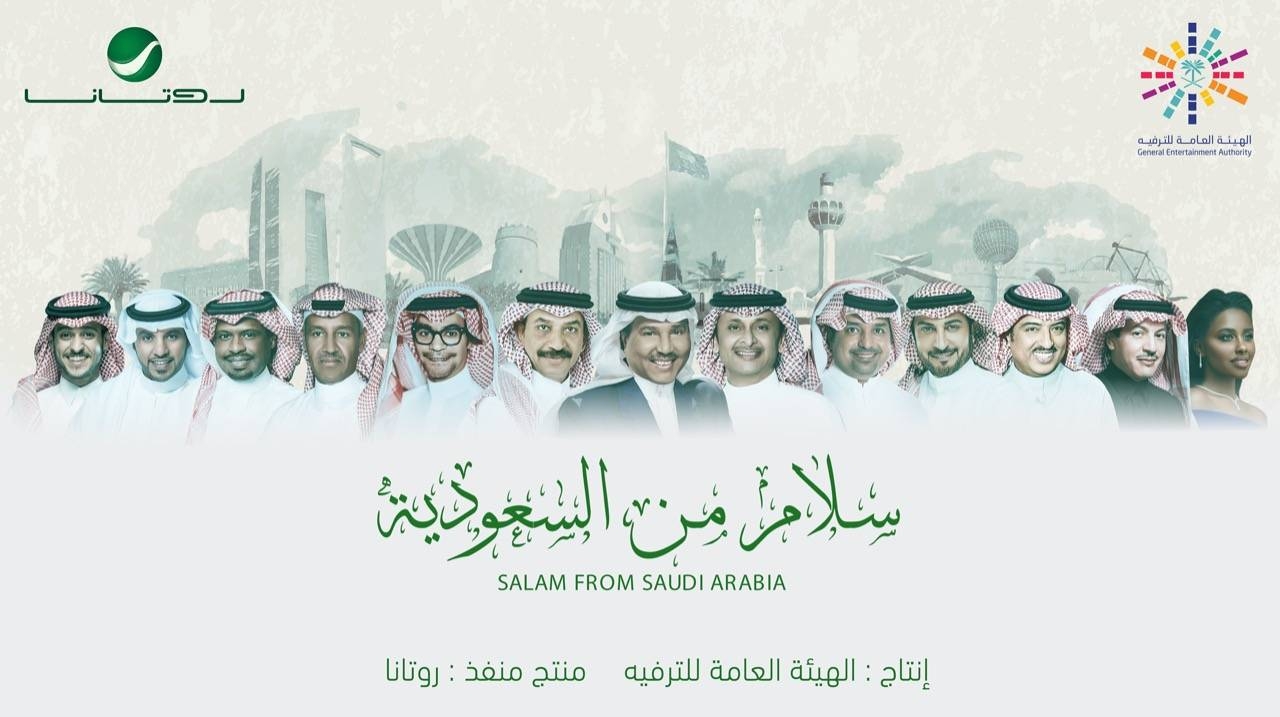 The lyrics of the song, penned by Abdullah Aboras, refers to all regions of the Kingdom and the specialities of each region, and features 13 Saudi artistes. Ahmed Alharamy composed the music for the song with music arrangement made by Seros under the supervision of Rotana Audio Visual CEO Salem Alhandi.

The idea of the song was conceived by Turki Al-Sheikh, chairman of the GEA, who keenly followed up on various stages of production.

The lyrics of the song, penned by Abdullah Aboras, refers to all regions of the Kingdom and the specialities of each region, and features 13 Saudi artistes. Ahmed Alharamy composed the music for the song with music arrangement made by Seros under the supervision of Rotana Audio Visual CEO Salem Alhandi.

In creating this unique work of national pride, poet Aboras was inspired by the diversity of different regions of the Kingdom. The song refers to their beauty and the giving nature of the country while praising the traditional images, geographical versatility and the traditions of the people in each region. Love is the common thread as they build the nation and support their leaders, showing the great culture and history of Saudi Arabia.

“I am proud of being part of this work of art with the elite of Saudi Arabia's singers. I am also pleased to work again with composer Ahmed Alharamy whom I worked with on the most notable national productions. This operetta is a gift to all Saudi regions as it refers to the 13 administrative regions and the features of each region. It is concise, short and simple. It sheds light on the strengths and rich diversity of all Saudi Arabia’s regions,” Aboras said.

Singer Mohammed Abdu said he was delighted to be part of this work with leading fellow artistes in Saudi Arabia. “A greeting from the land of peace and Islam, Holy Mecca. Islam is a greeting to the whole world, so this is a greeting of peace from Saudi Arabia,” Abdu said.

Abdullah also thanked Turki Al-Sheikh for supporting the idea and his diligent follow-up on the production.

“No wonder we are all united as Saudi artistes out of our love for the nation. Alongside Saudi citizens, we are all soldiers of the decisive King Salman, Custodian of the Two Holy Mosques, and Crown Prince Muhammad Bin Salman. The nation and leadership gave us everything. It is our duty to be part of any national work of art, especially when it is a song about the key administrative regions of our beloved Kingdom. ‘Salam from Saudi Arabia’ is a message of peace, love, safety, security, assurance and loyalty. It sums up to ‘We are all Salman, we are all Mohammad,” Rashed Almajed said.

“The nation deserves more national cultural initiatives such as ‘Salam from Saudi Arabia’ which brings all of us together,” Abady Aljohar said. He was also optimistic about more such efforts to represent the right image of Saudi Arabia, with “such cultural and historical diversity that everyone is proud of”.